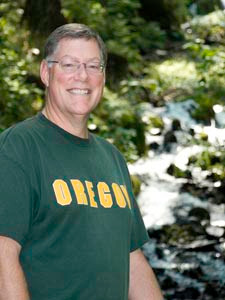 I was born & raised in Illinois. My family relocated to Oregon while I was in high school. In the course of my secondary education, I gained an interest in architecture, which I pursued at the University of Oregon. A requirement for one of the projects was to photograph models of spaces with different sized scale figures in them to visualize how architectural proportions affect the perceived comfort of a space. Having to borrow a camera, I became fascinated with the wonders and challenges of capturing an image on film.

I completed my original goal and worked in a number of architectural firms in Portland. My interest in photography continued to grow. I finally decided it was time to pursue my passion and began a new career in photography. I am drawn to the beauty of the Pacific Northwest and the world beyond.

When I was putting together a photo memory book for my parent’s 40th wedding anniversary I discovered pictures I had taken in Chicago when I was about 10 years old. I was pleasantly surprised to find I was able to capture interesting images long before I became seriously interested in photography. I originally selected a career path that led me to become an architect. The information gathered on that pathway helped train my eye for the design, composition, lighting and color that I now utilize as a photographer.

I enjoy ‘dissecting’ an image out of an overall scene, capturing an attractive picture from a seemingly hodgepodge of visual ‘noise’. I enjoy finding shots that encourage viewers to slow down, to look at the finer details that many of us miss seeing in our busy lives.

I see the world photographically. Even when I don’t have a camera with me, I frequently find myself thinking about which lens I would use to best frame the given scene. I often wish the world would stop while I study a newfound subject from various angles and with different lenses. The world is waiting for me to capture it with my camera!
© Bernie Doran Photography
Powered by ZENFOLIO User Agreement
Cancel
Continue